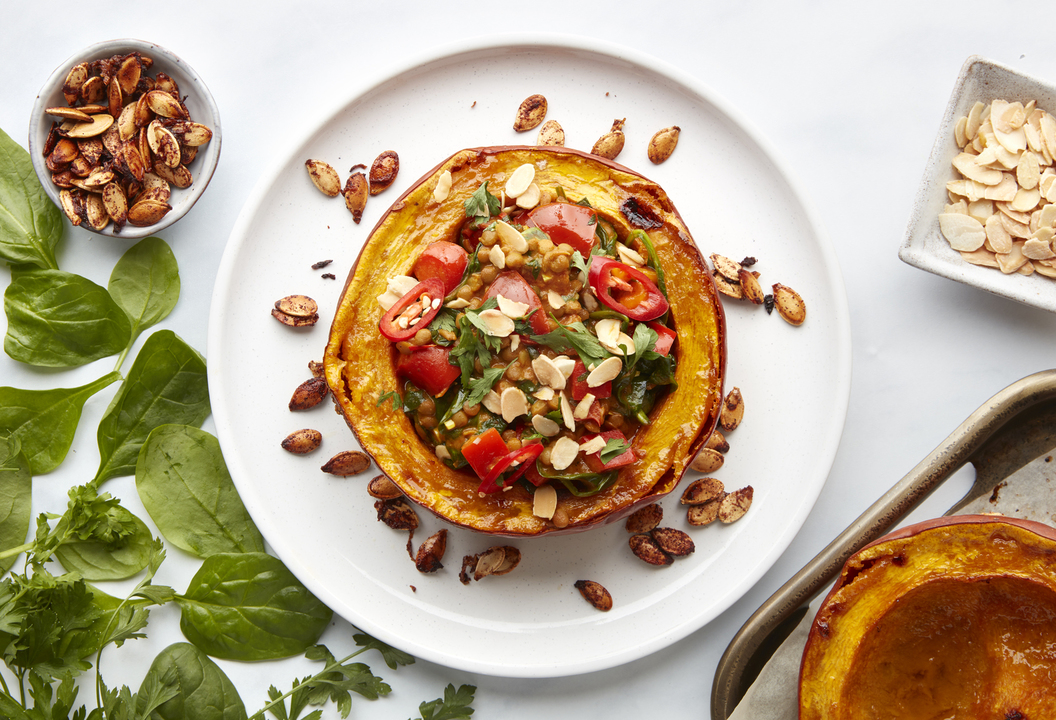 2. Carefully cut the pumpkin in half horizontally to give two bowl shapes. Remove the seeds from the pumpkin.

3. Place the pumpkin halves, flesh up on a baking tray, drizzle with 2 tsp oil and sprinkle with a pinch of sea salt. Place in the oven for 30-40 mins (depending on the size of the pumpkin) or until turning golden and the flesh has softened, turning halfway through.

4. Finely chop the garlic and the red chilli (removing the seeds for less heat). Dice the red pepper and the tomatoes. Roughly chop the parsley leaves. Dissolve the creamed coconut in a jug with 200ml boiling water. Drain and rinse the lentils.

5. Heat a dry medium-sized pan on a medium-high heat and toast the flaked almonds for 3 mins, until turning golden. Remove from the pan and set aside.

6. In the same pan, heat 2 tsp oil on a medium heat and cook the garlic and tikka masala paste for 1 minute. Then add the red pepper, tomatoes, creamed coconut, lentils and chilli (to taste). Simmer gently for 15 mins until the sauce has thickened, then add the spinach and half of the parsley for 2 mins. Season with sea salt and black pepper to taste.

7. Place the pumpkin halves on two warm plates and spoon in the creamy spiced lentils. Sprinkle over the toasted flaked almonds and the remaining chopped parsley.

Reserve your pumpkin seeds and roast these for a tasty nutrient-rich snack, see recipe below:

2. Remove any pumpkin flesh from the pumpkin seeds, wash them and leave the seeds in a sieve or colander for 5 mins to drain.

3. Spread out onto a baking tray and roast in the oven for 30 mins.